If you have noticed a recent surge in anti-money laundering (AML) news lately, you’re not alone. But what exactly is money laundering? What image does your brain conjure up when you hear that phrase?

The answer is obvious. At its core, money laundering is any process that converts ill-gotten “dirty money” to appear as if it came from a legitimate source. Loosely translated, it is “converting black money to white”. Any regulated entity (RE) that knowingly or unknowingly facilitates such transactions may be treated as an accomplice.

That’s why it’s important for REs to manage the risk of onboarding a customer who might indulge in such nefarious activities. AML screening does just that. It involves scouring hundreds of blacklists and negative news to screen out potentially suspicious individuals who might become a regulatory and compliance nightmare for you.

Governments across the world have realized that money launderers do not operate locally. To make themselves as untraceable as possible, they operate across borders, currencies, and jurisdictions.

It was clear. Governments have to either work together and collectively fight this menace or see their economies and societies destroyed. This prompted the formulation of a global framework for regulation against money laundering, which was implemented by participating countries.

Regulators on the move

In India, the foundation was laid through the Prevention of Money Laundering Act (PMLA) 2002 by the RBI, which criminalises usage of income generated from illegal sources and lays out a set of practices for AML due diligence.

What do the guidelines say?

RBI’s AML guidelines require REs to screen individuals and entities against a number of global and national lists, such as:

These are only some of the key checks mandated by the RBI. An exhaustive list is available with the RBI as per various circulars and master directives issued.

What you saw above are must haves. 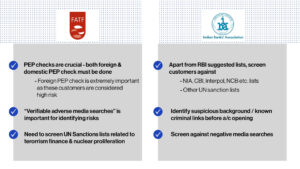 In this sinister thicket of AML due diligence, what should REs do?

How do you go about AML screening?

As a regulated entity, what do you do when you get a positive from one of the above?

If the basic check against the sanctions list is positive, you stop the process and formally report the application to the Ministry of Home Affairs and the Financial Intelligence Unit.

If the basic check is clear and any of the remaining two categories throw up a positive, it’s a case that enters your internal risk management decision. REs either seek additional management approval and classify such accounts as high-risk ones or completely decline to onboard the potentially high-risk customer.

Call in the AML experts

A lot of companies think that these lists are available publicly. Why do we need to get in experts to perform these checks?

You can go ahead and look for your name or your best friend’s in the search box. The search results are returned in the hit list that is so unintelligible that it would take several minutes to decipher, let alone take an action based on it.

Now multiply this effort by a few thousand such lists. Even if you collate these, it is virtually impossible to create and maintain cross-references with several search parameters on an ongoing basis.

For a human to carry out these checks on a regular basis is almost impossible.

We also spoke to companies that thought they could maintain their own Google search results for adverse media. They eventually realized that manual search takes an inordinate amount of time and provides several false positives, which only compounds the problem.

I could go on, but you get my point. An effective AML program involves complexities that are extremely hard to navigate without an AML expert. IDfy’s AML solutions let you automate your screening process and provide responses in near real-time. In other words, we look up hundreds of lists while screening a customer and let you know within seconds if there’s a hit.

Do check our detailed blog on ‘All you need to know about KYC in India‘ after this .

IRDAI Regulations for KYC in the Insurance sector, 2022

How to choose a partner for DigiLocker KYC