I plan to build my online e-commerce store on Shopify

Ribeiro’s first tryst with an e-commerce store has not been a profitable one. However, Ribeiro realizes that getting direct to customers is the best way for him to grow his brand and business. 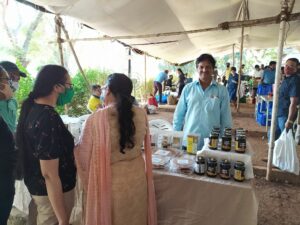 A few years ago, Bernard Ribeiro came across a farmer’s cooperative growing organic produce under the guidance of the spiritual organization of Swami Samarth. Other than ensuring clean organic practices, this group of farmers practices Agnihotra – an ancient Indian fire ceremony to cleanse the environment every day at dusk and dawn.

Ribeiro believes this makes their agriculture produce a better, cleaner, and higher quality than other organic produce.

Not much later Ribeiro co-created All Time Young. A brand of healthy food products made out of produce from these farms, co-owned by Ribeiro, the farmer’s cooperative, and the spiritual organization.

Ribeiro’s first tryst with e-commerce has not been a profitable one. He invested a significant amount of money in stocking up Amazon’s warehouse and becoming a preferred partner. Payments from Amazon have been erratic and unpredictable. Ribeiro doesn’t quite understand how they decide how much to pay him.

However, Ribeiro realizes that getting direct to customers is the best way for him to grow his brand and business. He’s planning to build his online store on Shopify. He will engage a digital marketing agency. He plans to get on all home delivery apps.

He has big plans with e-commerce store. Even though he’s not on Google Pay yet as he needs to upgrade his phone. He’s not able to download any apps on his current handsets. 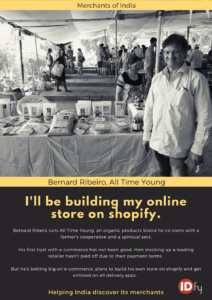 IDfy helps companies onboard merchants anytime, from anywhere, with any document. For more information, please write to shivani@idfy.com